Finding the beauty in nature 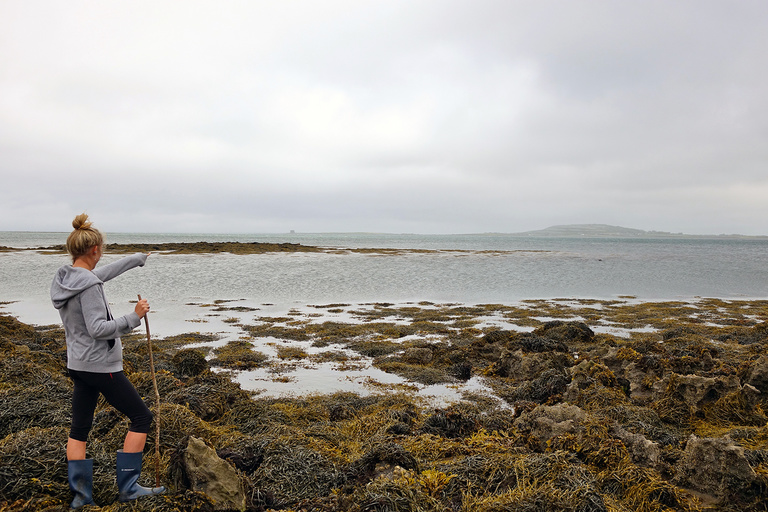 Stanley awardee Jacquelyn Whitman observes behavioral patterns of the common seal on the coast of Western Ireland. In addition to her research, Whitman also volunteered with several environmental and marine conservation organizations.

Stanley awardee, Jacquelyn Dale Whitman, has spent the last three years investigating the causal effect of ecophobia on marine-specific, environmental education. She believes that “ecophobia - a negative response, a paralyzing fear, or desensitization to the looming environmental issues - is directly responsible for America’s declining ecoliteracy rate and conservation inaction”. While educators have made various attempts to suppress and circumvent this growing issue, Whitman thinks that art and art processes have not been adequately tested in the fight against ecophobia and has made it her career goal to utilize Sculpture and Marine Ecology to positively illustrate the natural and anthropogenic factors threatening our oceans.

The Stanley Graduate Award allowed Whitman to travel to Ireland to conduct research for her MFA thesis in Sculpture. Her thesis question is one she described as “interdisciplinary and multifaceted”— What are effective ways to combine Art and Ecology to eliminate ecophobia in marine-based, environmental education?

Whitman said the opportunity to work in Ireland granted her both time and essential resources to start investigating multiple dimensions of this inquiry. From June 27-July 27, she lived and worked along the western coast of Ireland, specifically in County Clare and the Burren. While there, she conducted analytical research at environmental and marine research institutions in Galway, volunteered with environmental and marine conservation organizations in County Clare, and completed an Artist Residency at the Burren College of Art, an academic institution that specializes in Art & Ecology programs. 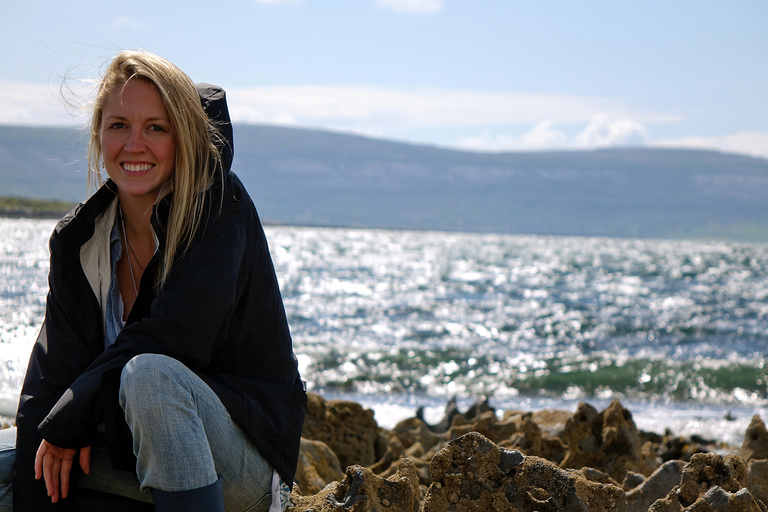 “I chose to conduct research in western Ireland because the country is an ambitious global leader in the researching, promoting, and practicing of environmental sustainability,” Whitman said.

“Almost every single person I met was involved in a form of environmental conservation or actively participating in promoting sustainability. The totality of this national community’s dedication to environmental protection is universally unique, and I wanted to be immersed in an environment comprised of people who hold the same beliefs and goals that I do and successfully put them into practice.”

Fortunately for Whitman, this augmented environmental consciousness allowed her to stumble upon a “marine biological, art, and historical treasure”. One day, the woman whose home she was living in gave her an article she came across in the Irish Times, titled “Creatures From the Deep Frozen in Glass”.

It told a short story of the Blaschka Invertebrate Glass Models—in the 19th century, a German glassblower named Leopold Blaschka and his son, Rudolph, began sculpting models of invertebrate marine species to be used as scientific research tools.

“The Blaschkas hand made over ten thousand models that accurately replicate invertebrates in excruciating detail using techniques that still baffle experts in the field of glass,” Whitman said. 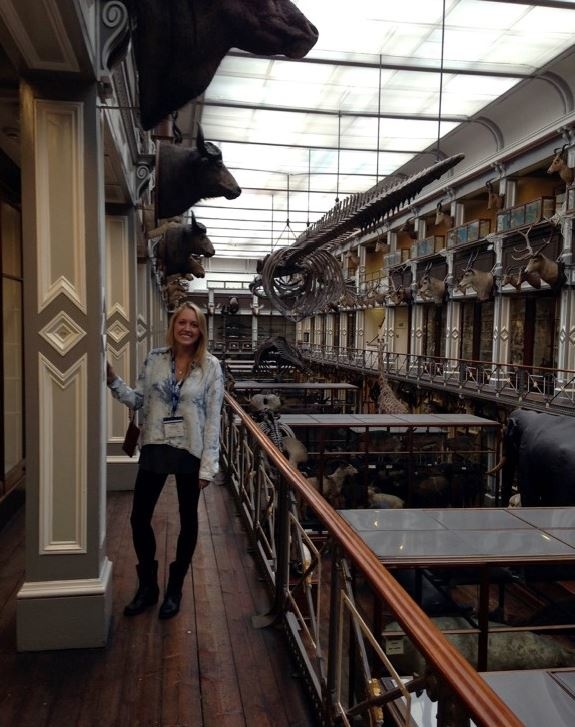 Whitman prepares to explore the Blaschka collection at the Natural History Museum in Dublin.

When they were created, these models served as invaluable educational resources because underwater photography and ocean life surveys did not yet exist at that time. However, as the

years went by, advances in technology slowly diminished their importance and pushed them into boxes and storage spaces.

In the 1960s at Cornell University, a collection of over five hundred glass invertebrate models was exhumed from storage. Dr. Drew Harvell, a marine biologist and professor at Cornell University, started cataloging the collection and recognized their impeccably accurate detail and historical importance. Because of their truthful replication, Dr. Harvell has been able to scuba dive around the world with the purpose of assessing the glass creatures to determine which of those are still present in our oceans and how abundant they are. This interdisciplinary, explorative process lead Dr. Harvell to claim “masterpieces of art can translate nature for us”.

“Immediately intrigued by the fact that Dr. Harvell was utilizing art objects to discover scientific truths, and because of its direct association with my thesis question, I dove down the Blaschka rabbit hole,” Whitman said.

She attempted to gather as much research on the Blaschka models as possible, but unfortunately, it was minimal. Baffled by the lack of available information, Whitman grew more fervent with her research, eventually learning that the Natural History Museum in Dublin had hundreds models in storage.

“I immediately contacted the director of the museum, explained my research topic to him, and asked for permission to see the collection - he happily granted me access for a few hours,” Whitman said. 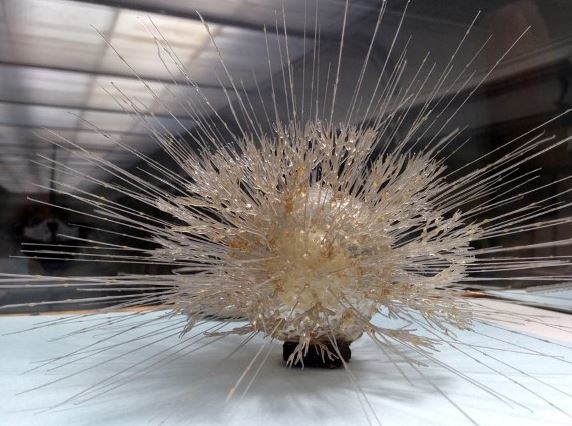 “Covered in dust, the Blaschka models presented themselves as physical records of our species’ global history of contradicting actions. They were witnesses of our quest for knowledge, perfection, enchantment, and our ignorance to environmental sustainability. Additionally, they were magnificent works of art.”

After her visit, Whitman began a conversation with the director on what was being done to promote the collection.

In short, the answer was nothing.

“After witnessing this undeniable mastery of artistic skill in combination with the scientific significance Dr. Harvell has proven to exist within each model, I decided that nothing was unacceptable,” Whitman said. 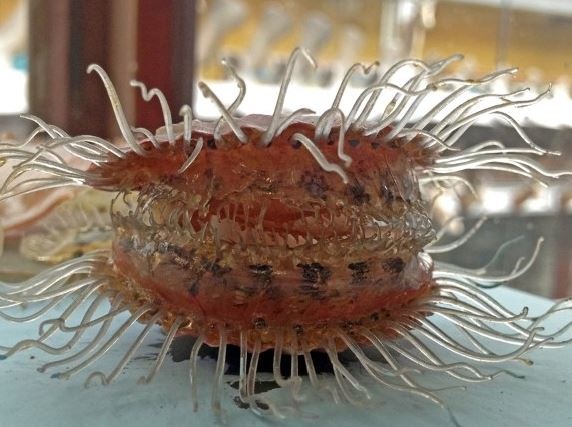 She believed these models should be seen by the world—and if they can’t be seen in person, they should at least be visually accessible online. Upon completion of her research period, she started working with the director on plans for professionally photographing the models in storage at the Natural History Museum for an online archive.

Ultimately, Whitman hopes that combining Art and Marine Ecology will create a bridge that makes academic research accessible to the rest of the world, thereby helping to create a global environmental intelligence.

Learn more about the Stanley Award for International Research, available for both undergraduate and graduate students.