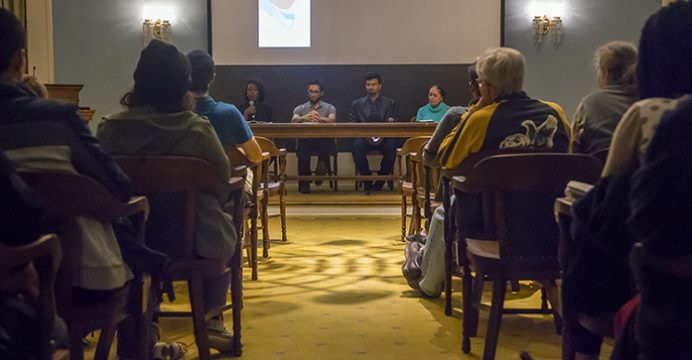 By Vivian Le, The Daily Iowan

With Election Day just four days away, community members came together to discuss Muslim-American identity in America in hopes to educate people and crush stereotypes.

“Regardless of who wins this, we have an aftermath of a horrific climate,” Ghoneim said.

Many of the panelists said they felt as though the rhetoric in the past year has encouraged a negative environment for Muslim-Americans. Some discussed issues they believe have been pushed aside regarding the Muslim community by the country.

Elbadri spoke out about being a black Muslim and how Muslims have been in America since the beginning of the country when West Africans were taken as slaves to America.

“We talk about a lot of Islamic identity, but we never think to look at the majority of Muslims in the world do not exist in the Middle East,” she said. “The majority of Islamic culture itself is very much non-Arab.”

Alamoti noted the American media has twisted the term “jihad” to have a negative connotation.

“ ‘Jihad’ does not mean anything violent,” he said. “It doesn’t mean that at all. It means struggle.”

The topic of media influence came up frequently in the conversation. Some panelists blame the media for the negative depiction of Muslim-Americans. But Avila said he saw its potential to advance the conversation.

“There’s a lot happening in arts and pop culture,” he said. “We’re using them to show our resilience and to show people we do have a story, and it’s not just whatever people may see in the media.”

The event ran in conjunction with an art exhibit curated by UI M.A. student Rachel Winter calledHave No Fear: Islamophobia in the 21st Century. The exhibit be will on display in the Old Capitol second-floor rotunda through Dec. 31.

Winter said the current discussions about Muslims, foreign policy, and terrorism sparked the idea to create an exhibit.

“I think when we start talking about foreign policy, and foreign relations and the Middle East, and Muslims, there’s a lot of partisan beliefs on the issue … it’s clearly divided in that way,” Winter said. “Art doesn’t have some of those connotations. It’s a different way to have the same conversations without the pressure.”

Kelsey Kramer McGinnis, a certificate adviser for the UI Center for Human Rights, was also an organizer for Thursday night’s event. Kramer McGinnis hopes the event will help people to put faces to the issues.

“A lot of Iowans have never met a Muslim person,” Kramer McGinnis said. “Iowa is not a unique state in this way. So when they read the news or hear the news about the Muslim refugees or Middle Eastern refugees, it can become a faceless term that can so easily be turned into something scary or unfamiliar. But when you start to see that there are a lot of Muslim community members in Iowa, it helps people to not fear the unfamiliar, and I think that’s really important.”