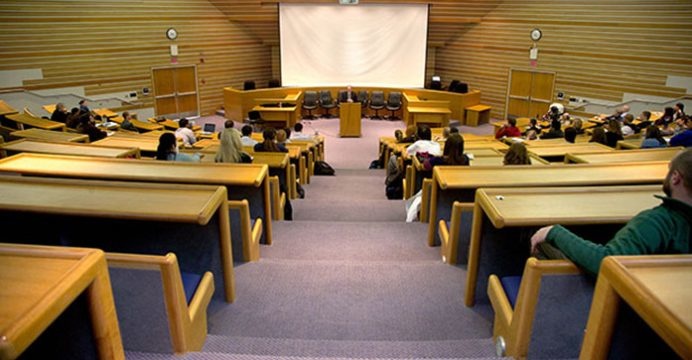 By Kayli Reese, The Daily Iowan

Deciding to attend law school is a feat in itself; deciding to pursue law school in a different country with new customs can make the task more daunting.

“Studying the law is so difficult, even if you’re from the United States,” said Mariah Wallace, a law student at the University of Iowa. “Going to a new country, especially one you’ve never visited before, is very brave.”

This idea was the bud of the Global Ambassadors Program that started at the UI College of Law this fall, said Jennifer Blair, the original director of the program.

The main point of the program, Wallace said, is to make the law school more inclusive in its student body. She said she feels this theme is especially important in today’s society, and meeting new people from different backgrounds is important for all students to do.

Blair said a group came together last spring to discuss ways to better connect international students to the law school, and an organized program was decided to be the best way to proceed.

The program consists of domestic and international students, Blair said. She said global ambassadors meet regularly to come up with different events students can partake in together.

Each ambassador works at least one social event in addition to being a part of the planning process, she said. Events thus far have included Thanksgiving dinner, pumpkin carving, and apple picking, she said.

Wallace said the program also has a one-on-one aspect, in which new international law students are asked to fill out a questionnaire about how much they may like to meet with a potential ambassador mentor.

Then, she said, new international students are paired with either a domestic student or an international upperclassman in the program. Mentors aid students with their adjustment to law school, she said, from where to buy business clothes to how to study for exams.

UI law student Sarah Thielen is one of these mentors in the program. She said her main job as a mentor is to be available to answer any questions her mentee may have.

Blair said she believes the program, while just starting up, is doing very well.

“The success is largely due to the extraordinary nature of the students,” she said.

Motivated students at the core of the program are the key to success of the growing program, she said. The program pulls students together, she said, and helps bring students of varying backgrounds together. The students in the program are all bright and motivated in their goals, welcoming the opportunity to be around new people.

Blair noted that the Global Ambassadors Program works well in the law school, because it is small enough for the program to flourish.

She believes the UI does a great job at giving students opportunities to know each other better, but this program digs deeper into different cultures and gives students a different perspective they may not have otherwise.

Thielen said being a member of the program opened her eyes quite a bit to new cultures and ways of life. Being a member intertwined with other aspects of her life as well, she said, as she had studied abroad in France and knows that different cultures bring new ideas and thoughts that may not have otherwise been realized.

“Our way in the United States isn’t the only way to do things,” she said.