Starting their own business to improve lives in Africa 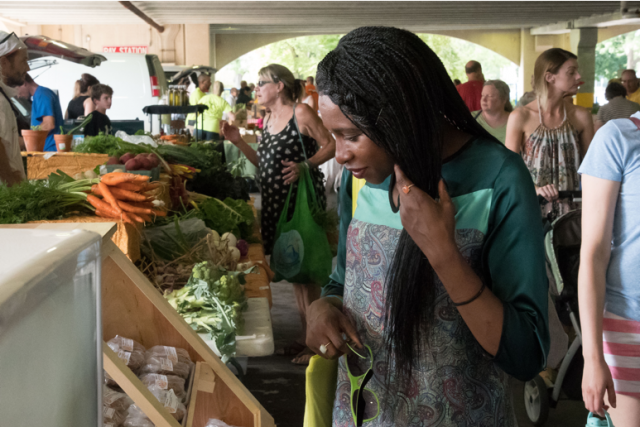 Mandela Washington Fellow Chipo Chikomo visits the Iowa City Famers' Market. Chikomo wants to start a business that manufactures and markets reusable sanitary napkins, especially for high school girls. In her home country of Zimbabwe, many families can no longer afford sanitary napkins, which leads many girls to skip school for several days every month. Photo courtesy of Helaina Thompson.

Adama Diakite wants to do more than just raise chickens. He wants to change the way agriculture operates in his home country of Guinea.

Chipo Chikomo wants to do more than ensure young women have access to sanitary napkins. She wants to make sure women are treated as full and equal citizens in Zimbabwe.

Diakite and Chikomo are two of the young African business leaders who are spending six weeks at the University of Iowa this summer as Mandela Washington Fellows, part of the U.S. State Department’s Young African Leadership Initiative (YALI).

The fellows are among the 1,000 who were selected from Sub-Saharan countries to participate with numerous colleges and universities across the United States, chosen from a pool of more than 40,000 applicants. They arrived in Iowa City June 17 and will leave on July 31 for a four-day summit in Washington, D.C., and a meeting with President Barack Obama.

During their six weeks at Iowa, they are learning how the American economy works and the basics of starting and operating their own business. They come from 18 countries and various backgrounds. Many have started agricultural businesses growing rice, mushrooms, livestock, and fish. Some have started schools or other educational organizations to provide better futures for their communities’ children. Others operate microfinance companies to help entrepreneurs get their start. Patrick Henry Rasamoela runs a cheesecake company in Madagascar. Jean Berchmans Siboniyo is a former journalist who now manages a U.S. cultural affairs center in Burundi after the government threatened him and his newspaper.

But the fellows’ goal is more than just starting a business and making money. For many of them, like Diakite and Chikomo, their goal is nothing less than to transform their countries.

“I want to help try to solve the problem of food security in my country,” says Diakite, who decided to go back to his family’s roots in agriculture and start an egg-laying farm with 2,000 chickens. He felt he could make a bigger difference doing that than he could in his previous job at a bank.

Mandela Washington Fellow Adama Diakite speaks with a farmer selling eggs at the Iowa City Farmers' Market. Diakite, a former bank employee, hopes to start an egg-laying farm of his own. Photo courtesy of Helaina Thompson. 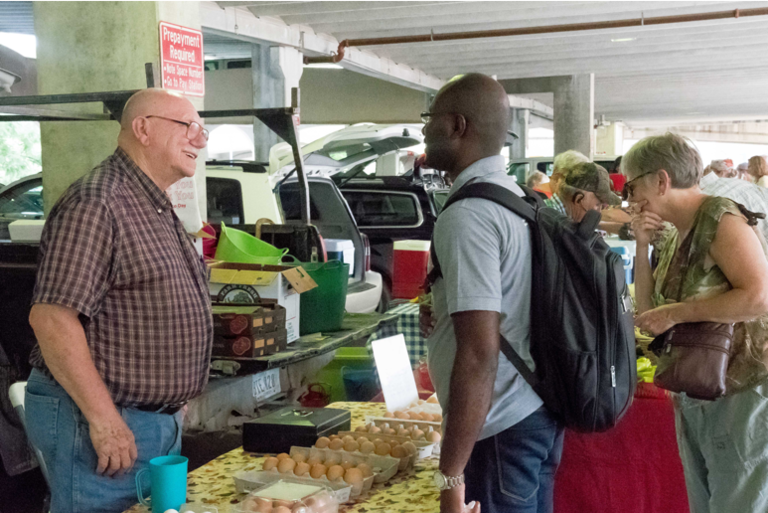 Mandela Washington Fellow Adama Diakite speaks with a farmer selling eggs at the Iowa City Farmers' Market. Diakite, a former bank employee, hopes to start an egg-laying farm of his own. Photo courtesy of Helaina Thompson.

“Most farmers in my community are sustenance farmers only and very poor. I want to model modern farming and revolutionize agriculture so we have enough food,” he says.

For Chikomo, transforming her country means starting a business that manufactures and markets reusable sanitary napkins, especially for high school girls. Zimbabwe’s economy is such that many families can no longer afford sanitary napkins, which leads many girls to skip school for several days every month.

But if the girls had access to inexpensive, reusable napkins, they could stay in school, get better grades, and have more opportunities in a society that still does not treat women as equals. Chikomo is an example of this herself. When her father died recently, she learned about it only from reading the newspaper. Nobody felt it was important to tell her. She’s just a woman.

“If I had been a son, they would have told me,” she says. “It was a turning point in my life. I realized that if I didn’t stand up to fight this, these things will just keep happening.”

While the fellows all have big dreams and transforming visions to help other people, what they lacked was the basic know-how. To learn more, they’ve visited Iowa businesses both big (Rockwell Collins in Cedar Rapids; DLR Group engineering firm in Des Moines), and small (organic Kingfisher Farms near Davenport; Cyber Science 3D in Coralville). They’ve visited businesses that make things (the Oral B factory in Iowa City) and others that design things (Stanley Consultants in Muscatine).

They also took a compressed version of Venture School, a program offered by the John Pappajohn Entrepreneurial Center (JPEC) to help would-be entrepreneurs determine if that great idea they have for a business really is such a great idea. One of the most important tips the fellows have received so far is that a business needs a market to succeed. That’s not always the case in Africa, where the fellows say entrepreneurs rarely think about their customers when starting a business.

“I’ve really enjoyed getting to know people with know-how who talk to us about how they started their business and are willing to help us,” says Chikomo. “I didn’t know there were so many books about how to start a business.”

They’ve learned about finance, accounting, and negotiations; global supply chain logistics; and organizational structure. They visited the state capitol in Des Moines and Bettendorf City Hall to learn about government’s role in the U.S.

Diakite says now that he’s participated in the program, he’s not just taking more knowledge of entrepreneurialism back to Guinea, he’s taking the support of the U.S. people and the U.S. government.

“In my country, if you have the support of the United States, you can convince more people to help you,” he says.

But what the fellows will remember most about Iowa is the people they met, who were friendlier and more helpful than they could have imagined. People who hold open doors and help total strangers who are lost, even willing to call cabs and wait with them for the driver to arrive.

“You can take five minutes here just to say good morning to another person,” says Diakite. “I really appreciate the way people live here. I’m in the best place in America.”