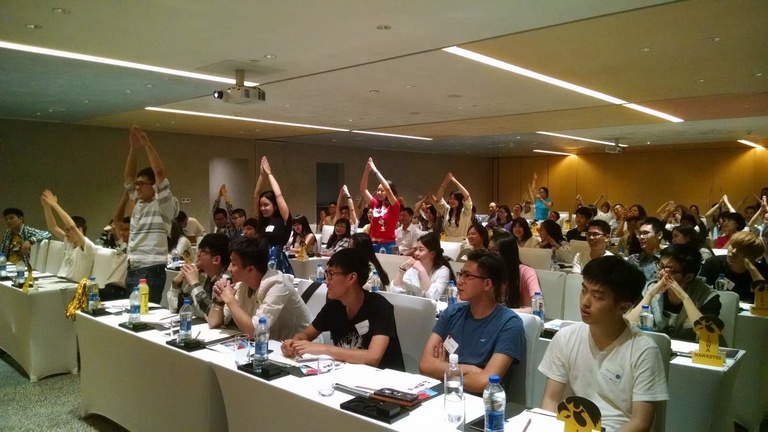 In June, orientation events like this one were held in the Chinese cities of Beijing and Shanghai for international students headed to the University of Iowa in fall 2016. Here, several students form the “I” during the I-O-W-A chant.

IOWA CITY — The University of Iowa’s international student enrollment for years has skyrocketed — more than doubling over the past decade and setting eight straight annual records.

But this fall could bring the first sign the campus’ international student population is leveling off, with an anticipated slower growth rate of new undergraduate scholars from abroad.

So far for this fall, 506 new international students have accepted admission to the university, compared with 650 by this time last year, said Brent Gage, UI associate vice president for enrollment management.

“The growth at Iowa, particularly in China, has come at a time where large numbers of students were looking to the U.S. for higher education and their economy was very strong,” Gage said. “While Iowa has experienced fairly significant growth, that growth is beginning to level off.”

He cited “increasing competition and economic factors that make the cost of education in the U.S. more challenging” as possible factors behind the decline.

The UI did receive more international undergraduate applications for the fall and agreed to admit more of them, said Downing Thomas, associate provost and dean of International Programs. But fewer students than expected so far have actually accepted the admission.

“So this was not an anticipated drop,” Thomas said.

Students still have time to accept the UI’s admission offer, with international orientation beginning Aug. 8. But “we don’t know how many will show up,” Thomas said.

International enrollment is somewhat of a guessing game because visa restrictions prevent students from coming to campus too early and they often don’t enroll until they arrive. So admissions officials across the state come up with predictions based on known acceptances and historical trends.

Iowa State University is looking at increases in acceptances so far. In fact, 375 international freshman have accepted ISU’s offer of admission to date — up 25 percent from this time last year, said Katharine Johnson Suski, ISU Office of Admissions director.

“But we are always really careful until we get to that last day,” Suski said. “Because we don’t know who will come to campus.”

Coe College, likewise, has seen an 88 percent spike in international applications, with 592 applying so far compared with 315 through September last year. The college, however, has admitted just 20 more students to date, and the number who have submitted deposits is actually down by two so far.

Citing economic changes, increased competition and varying institutional goals, many of the schools have altered their international recruiting efforts. Coe’s international recruiter, for example, is traveling more. UNI has moved its focus from Saudi Arabia to other countries due to economic instability and scholarship changes. And the UI has created partnerships with the universities of Missouri and Colorado “to increase our exposure to students seeking higher education in the U.S.”

Once students do arrive, the schools are doing more to welcome them to campus and American culture.

ISU, for example, is expanding its international student orientation this fall from one week to two.

“When a student is adjusting to a new university and an entirely new culture, we have come to believe that more time is needed to get rested and get their feet on the ground,” said Deb Vance, interim director of the International Students and Scholars Office at ISU.

Peter Gerlach, international student adviser for Coe College, said his institution also is broadening its welcome for students from other countries, including Coe President David McInally and Cedar Rapids Mayor Ron Corbett in the opening session.

“This is an effort to help break down barriers that exist between international and domestic students,” said Brian Leal, UISG diversity liaison. “We have no intention of having this be a one-year deal. Long-term sustainability is our ultimate goal to create a more inclusive UI campus.”