On the evening of February 1, 2016, Iowans will come together to nominate candidates from both the Republican and Democratic parties who they wish to see move on to the national election in November.  Iowa continues to hold the status of being the "first in the nation" in the long procession of votes that will stretch out over the next several months as the two major political parties begin to seriously narrow down their candidates and eventually select one person to be the formal nominee of that party for President of the United States.

This post will attempt to explain the process, the role of the caucuses in respect to the greater process of electing the next President of the United States, and how interested international students and scholars can witness a truly unique aspect of American politics.

First, a little general history of the process to elect our next President.  In the U.S., the presidential election is a complex process that begins with the states through the primaries and caucuses that occur in each state from around January through early summer during the presidential election year.  The primary system is easiest to understand, as it functions very similar to what happens on the general election day:  voters in each state are divided into precincts based on where they live, and report to designated voting sites to case their votes.  A few states, including Iowa, have the caucus system, which involves gathering in groups at officially designated locations in order to make decisions on who to support.  The rules and processes vary a bit from one state to another, with essentially the votes collected in the various precincts eventually determining the number of state delegates assigned to vote for a given candidate at the large national conventions the two major parties will hold later in the summer.  A great infographic that outlines the entire presidential election process can be found here. 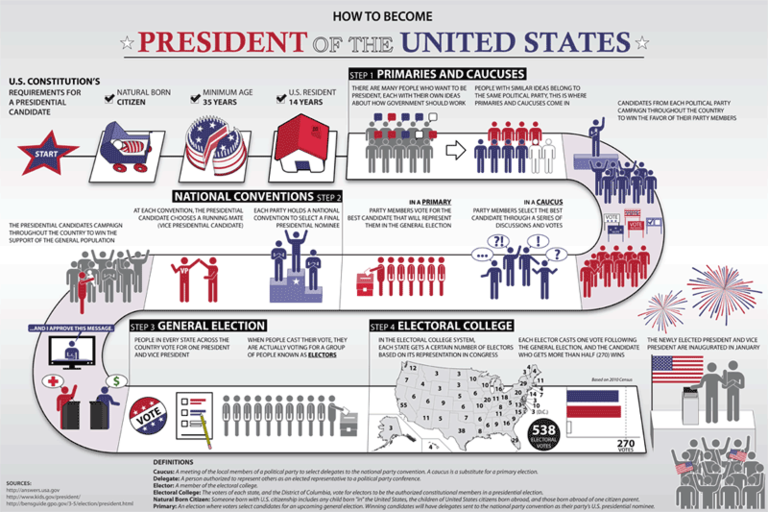 We should also note that the Democratic and Republican parties are not the only two parties who participate in U.S. elections, but historically are the main parties who thus far dominate American politics at the national and state levels.  There are a number of what are called "third party" candidates, and have been for almost as long as the U.S. has held elections.  However, the two-party system has been the dominant classification in the American political system (with a brief break of about 10 years) since the first presidential election after George Washington's two terms, when members of the Federalists party ran against members of the Democratic-Republican party.  In recent years we frequently see candidates from parties such as the Libertarians, the Green Party, and Independents conduct their own runs for President of the United States.  But due to the large majority of candidates being members of either the Republican or Democrat party, the system of primaries and caucuses helps narrow down the candidates until one candidate is chosen to represent the party in the national presidential election.

The Iowa Caucuses have held the distinction of the being the "first in the nation" start to the electoral process during each presidential election cycle for over forty years, closely followed by New Hampshire holding its primary.  This affords some unusual attention given to both relatively small states that would likely not otherwise occur.  Therefore Iowa sees presidential candidates begin campaigning throughout the state even a year before the caucuses occur, with the presence of candidates increasing in the weeks and months immediately preceding the caucuses.  Along with the candidates, news reporters from the U.S. as well as abroad flock to Iowa to cover the candidates on the campaign "trail" as they make stops at small towns and large cities around Iowa to make speeches and meet voters.  Even ordinary voters from other states will travel to Iowa in order to attend campaign rallies, sort of a political "tourism."  As candidates wax and wane in popularity, crowd size can swell to the thousands at some large events, while other events enable candidates to meet with only a couple dozen residents.  Most of these campaign rallies are open to the public, and international students and scholars are welcome to attend - one does not have to be a voter to do so.

This year, on the night of February 1, throughout Iowa voters who ally themselves with either the Democratic or Republican party will meet in large groups at locations designated based on their local residential address.  International students and scholars are not eligible to vote at any point during the presidential election process.  However, the caucus meetings are open to the public and reporters and visitors may attend as observers only.  You cannot participate in any manner, but you can be there to watch.  The processes followed by the two parties differ quite a bit.

The Republican Party process will include several agenda items, including a poll on who voting members prefer moves on to ideally become the nominee of the Republican National Committee.  Voters at the Republican caucus will indicate their preference privately on paper, which is passed to the local chair for tabulation and announcement.  The group will also elect county committee members, decide who will serve at the county convention as delegates, and make recommendations for subject matter to include in the Republican party "platform' during the election.  A "platform" is the official position or statement of values put forth by parties and their candidates.  Examples might include positions on issues such as reducing or increasing taxes, health care, immigration, or Social Security.

The process for the Democratic Party in Iowa is quite different.  At their caucus sites, Democrats will publicly indicate their preference, often by means of raising hands or moving together into groups supporting individual candidates and then having those numbers counted.  It is possible some members may initially declare themselves to be "uncommitted."  After the first round of declaring what "side" members are on, the local chair must see if each candidate's group is "viable," meaning they have sufficient membership to elect at least one delegate at the next tier of elections held at the county level (usually 15%).  If a candidate's group is too small, then members may attempt to persuade those candidates to join their group ("come support candidate A instead of candidate B") and also persuade uncommitted voters to ally with a candidate.  This provides opportunities for supporters to further discuss why they think their candidate is the better choice.  As a result it sometimes can be a lengthy process.  Like the Republican groups, the Democrats will also elect local party leaders and discuss what items they wish to move forward to become part of the national party platform.  Once the second round of voting occurs then counts are taken and forwarded to the central committee.

In Iowa, the votes given at the precinct levels as described above send delegates through several levels:  next to the county convention, where delegates are elected to move on to the district conventions in Iowa before moving on to the state convention.  These members then attend the Democratic National Convention in the summer as delegates to represent the votes their candidates received during the initial caucus night.  While in some cases delegates may be able to change who they vote for, it is very unusual, so that whoever wins on caucus night for each party is generally declared the "winner" for Iowa.

There is some criticism of the caucus process.  Unlike states who hold primaries, where voters can stop by during a flexible range of hours throughout the day and evening, the caucuses are held at a set time and can last an hour or two, which can disadvantage those who have to work or who have other obligations at that time.  Some steps are being taken to help expand opportunities to participate, such as the Democratic Party implementing satellite caucus sites that may operate on different schedules, and tele-caucuses so that Iowans abroad for things like the military or study abroad can participate.  Concerns have also been expressed regarding the accuracy of reporting votes, so both parties have created special apps to help all of the precinct sites throughout the 99 counties in Iowa report their numbers on caucus nights.

As mentioned before, this can be a great opportunity for international visitors to experience something very unique, as only about one dozen other states use the caucus system.  Again, these are open to the public so that people who are not eligible to participate and vote are still able to enter as observers.  I would suggest not going in large groups so that the spaces are not overwhelmed, but one idea particularly if you feel nervous about attending is to find a friend who is eligible to vote locally and planning to attend.  Go with them as a guest.  It will provide an experience you won't forget, and depending on how the next election goes, it will be either 4 or 8 years before we have another large-scale presidential election where both parties are seeking a candidate.

You can find the location of caucus sites for the Democratic Party here.  The Republican sites can be found here.