Flexibility in the field

Natalia Santos and Ben Scott share insights from their international experiences in Ecuador and Brazil. 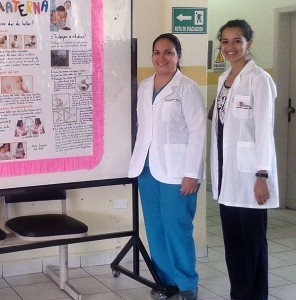 “Staying flexible and having my skills tested was really cool,” says Natalia Santos, an MPH candidate in community and behavioral health, who spent a month in Ecuador in summer 2015. A native of Brazil who grew up in Nebraska, Santos was already working on her research interests of food availability and quality when the dean of the Universidad de San Francisco de Quito visited the University of Iowa last year, piquing her interest in South America. The Global Public Health Student Travel Grant helped her to turn the connection into an opportunity for field research.

One of Santos’ goals was to track the kinds of food for sale and where food can be purchased in Ecuador. She quickly found this to be an overwhelming task. Not only were there stores and street stands selling everything from fresh fruit to the Ecuadorian equivalent of fast food, but vendors routinely hop on public buses to sell food. It didn’t take long, however, for her to identify likely factors in why there has been such an increase in obesity and diabetes in the Ecuadorian population.

“The vast availability of foods high in fat and carbohydrates, combined with large, inexpensive serving sizes, has been an influence on the choices made when people purchase food,” says Santos. Another possible contributor to the obesity epidemic is the increasing prevalence of sugar-added beverages, which people choose not only for the taste but out of a belief that packaged drinks are safer choices than water, since potable water is an issue in the area.

Santos split her time between food research and giving health and wellness talks to patients at local clinics, a job that she was assigned after arriving in Ecuador. Although she didn’t have the materials with her that she would have liked to use as the basis for her talks, she says, “It was a perfect way of keeping me on my toes, and putting all my education up to this point to great use.”

Santos was especially glad to provide education to women and girls about reproductive and sexual health. She became so confident about the positive impact of her talks that she is helping her host university to implement a program where local public health and medical students are placed into underserved community clinics as long-term interns. 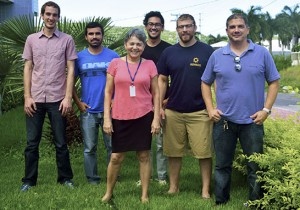 As an epidemiology graduate student, Ben Scott (MPH ’15) worked in the laboratory led by Christine Petersen, CPH associate professor and director of the Center for Emerging Infectious Diseases. Scott was part of her ongoing study of leishmaniasis, a disease that causes painful sores and attacks the liver, spleen, and lymph nodes in both humans and dogs. Spread by sand flies that bite humans after biting infected dogs, the disease is much more prevalent in South America than in the United States.

Scott wanted field experience with Petersen’s lab partner in Brazil. “I knew I was going, even if it meant taking out a loan,” says Scott of his desire to work with Dr. Selma Jeronimo and the Institute of Tropical Medicine at the University Rio Grande do Norte.  Receiving the new Global Public Health Student Travel Grant made his plans possbile.

Jeronimo’s team was collecting data for a study about the effectiveness of insect repellant dog collars as a tool in preventing both human and canine leishmaniasis. Scott had hoped to spend his time analyzing the data, but when he arrived in Brazil he quickly realized that data entry was the most pressing need. Transferring the results of written surveys into electronic form is always time consuming, but with only two computers devoted to the study it turned into a relatively all-encompassing task.

Scott said that being flexible is an important lesson of collaborative, international research. He was also happy to be able to use his experience in epidemiological methods to change some of the formatting to allow for more detailed future analysis.

“Sometimes it is important to be humble and accept that even though you’re capable of doing more,” says Scott, “the thing that needs doing is equally impactful.” Scott is now on his way to a job with the State Department of Health in Kentucky where his adaptability will no doubt be an appreciated skill.

This article originally appeared in the Fall 2015 issue of InSight, a publication of the UI College of Public Health.