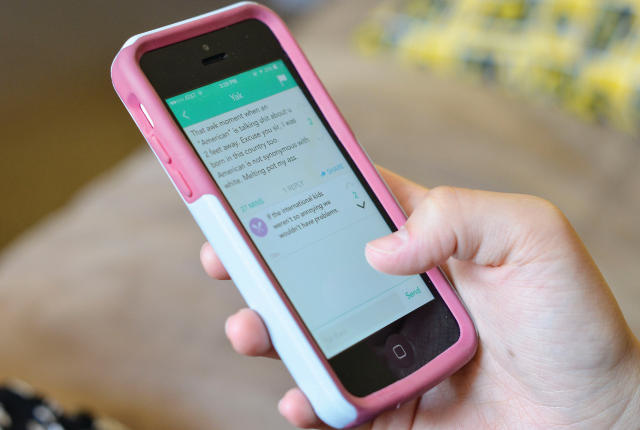 Yik Yak is being used as a platform to propagate anti-Asian and racist messages about University of Iowa students.

Masked by pseudonyms and anonymity, social media is often viewed as an attractive way to express one’s feelings candidly. But the same technology that allows users to share ideas and constructively engage with others too often devolves into a toxic, often hurtful environment. As social apps like Yik Yak, which allow users to anonymously share their opinions about anything and everything with those nearby, continue to gain popularity at the University of Iowa, many Asian-identifying students have found themselves the subject of racist and xenophobic messages.

Their crime, according to these hateful messages? Simply existing in the same space, on the same campus, as their mostly white peers.

Though a majority of Yik Yak posts are neutral and mundane in context, the phenomenon puts into perspective the absence of cultural competency and the much-needed conversation about these shortsighted and hurtful posts. Though the app was never designed for serious correspondence, the regular occurrence of racist messages indicates just how real—and how prevalent—these feelings are within the UI campus.

Another wrote,”Guys if we don’t do something soon this university will be more Asian than anything, and if so I’m leaving…”

“So apparently it’s [sic] no longer jives to make fun of Asians on account of some lame initiative started by students, but it’s still perfectly fine to make fun of students in Greek life,” read another Yik Yak post, this time responding to the Facebook album, equating racism with the derision of (again, mostly white) fraternities and sororities.

In the spring of 2013, a similar situation occurred on Twitter. The accounts, @UIAsianProbz and @ICRacists, highlighted the overt discrimination and prejudice remarks made against Asian students insulting their language, dress and mannerisms.

Although the University was made aware of this issue, the administration remained silent. Recently, however, the issue resurfaced through a public Facebook album curated by a group of students titled, “Xenophobic/racist things on social media at University of Iowa.” The album included various screenshots of hateful messages found on Yik Yak’s, with the initial aim of raising awareness about this ongoing issue.

Indeed, the album received large amounts of positive feedback on Facebook in the days following its publication. When asked about the attention the album had received, its creator, Erin Bovid, remained cautiously optimistic.

Bovid isn’t calling for a drastic change in policy so much as an attitude shift among UI students and administrators.

“We don’t want this to be an issue of how international students assimilate, although that is still important,” she said. “It’s not about forcing people to get along. You can at least acknowledge the issue and let them know that this is not what this campus stands for. I think people get confused with the message of all of this.”

Caitlyn Kavan, a senior at the UI and co-creator of the Facebook album, echoed Bovid.

“This silence [in the spring of 2013] sent the message that this kind of behavior is acceptable, which is why it continues to happen,” said Kavan. “In raising this awareness, we are not searching for immediate solutions, calling out individual acts of racism or trying to force interactions between international and domestic students … We want to create and sustain a campus environment where students of all identities feel safe and accepted.”

Soon after publishing the album, its creators—in collaboration with the aforementioned student organizations—hosted a forum to raise awareness about the issue. On Oct. 14, about 30 students and faculty met at the University Capitol Centre to discuss cultural competency issues affecting the UI’s Asian student population. Among those present were representatives from the UISG and UI Dean of Students Lyn Redington.

At the outset of the discussion, participants agreed to be inclusive, and to listen and respect each other with the goal of creating a dialogue wherein students and faculty felt comfortable speaking openly and honestly about the problem, and what can be done. Individuals shared their personal experiences with racism, with stories coming from many different students of varying backgrounds.

Eventually, the conversations shifted to an examination of a statement by UI Vice President for Student Life Tom Rocklin, published on Oct. 1 by the Daily Iowan.

“We see these kinds of posts out of ignorance and fear, but another reason they continue is because other students don’t challenge them,” Rocklin said.

Though Rocklin wasn’t present at the Oct. 14 meeting, Bovid offered an impassioned response.

“Standing in front of all of you tonight, that statement is false, and this issue has been challenged many times in the past,” she said. “As an incoming student here you are taught the The IOWA Challenge and one of the five expectations states to excel and if we are settling for this type of campus climate, are we really trying to excel?”

Throughout the discussion, several students urged the UI to push for changes in its approach to cultural competency on campus. One student mentioned, “Diversity by numbers does not mean that the mindset is diverse. Just having people from other places does not mean we are a diverse university.”

Others suggested the UI implement cultural competency entrance courses and training, along with the idea of providing more educational resources to create mindfulness among the student population.

One attendee, who works for the University of Iowa Hospitals and Clinics, noted that there were specific orientation programs they were required to complete before starting a job at the hospital.

“When I first came here in 2012, I always wondered why they had a separate orientation for students,” he said.

Redington, UI Dean of Students, emphasized the need for more resources devoted to programs where students can turn when they feel they are a victim of bigotry.

“Where do we go when we are feeling biased? Do we have a bias response team? The answer is ‘No.’” she said. “Do we need one? Yes.”

Redington lauded the event organizers, saying, “What I have really appreciated about this opportunity is what you all are willing to do. Instead of demanding a statement from the University, which itself can’t do much. We all can make these changes if we act together. I really applaud you for this.”

Attendees shared their ideas and frustrations as students quickly scribbled down their thoughts in preparation for the next meeting. Though details are still in flux, a follow-up session is in the works that will focus on short-term goals and feasible “next-step” actions. The Oct. 14 session, meanwhile, closed with positive feedback from both students and faculty.

Rosy words from UI officials aside, however, questions of efficacy remain.

Our campus is always a work in progress but in the process, absolutely no one should have to feel like they don’t belong. The University should be a safe and inclusive environment for all students, present and future. Let’s talk about this.