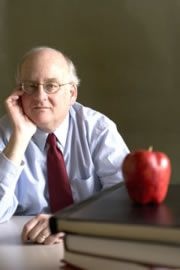 Philip Altbach is the fifth speaker in the Commitment to Internationalization lecture series. His talk, "The Peril and Promise of Internationalization in the Era of Trump, Brexit, and Global Competition," will be on  March 11, 2019, at 4:30 p.m. in room 1117 of the University Capitol Centre. This lecture continues the conversation about the UI's vision and strategic themes for campus internationalization.

Philip G. Altbach is Research Professor and Founding Director of the Center for International Higher Education at Boston College, where from 1994 to 2015 he was the Monan University Professor. He was the 2004-2006 Distinguished Scholar Leader for the New Century Scholars initiative of the Fulbright program, was given the Houlihan award for distinguished contributions to international education by NAFSA: Association of International Educators, the Bowen distinguished career award by the Association for the Study of Higher Education, and has been a senior associate of the Carnegie Foundation for the Advancement of Teaching. In 2010, he was Erudite Scholar of the Government of Kerala. He has taught at Harvard University, the University of Wisconsin, and the State University of New York at Buffalo.

Below is a Q&A with Dr. Altbach about the globalization of higher education.

How does globalization broaden higher education?

We live, despite with the wishes of President Trump—and a majority of Iowa voters in the 2016 presidential election—in a globalized world in which economies, politics, and societies are inevitably intertwined and related. Complex and “hot button” issues such as immigration and trade relations are among the key elements of globalization.  These, and other, issues are controversial and can be argued from many different perspectives. One thing is clear, regardless of one’s opinion, is that we need to understand in a “fact based” way the complex implications of globalization. Universities are the central institutions for understanding globalization—by their nature they are international—through the curriculum, students from all over the world, and faculty and researchers with international backgrounds and interests. In recent years, as science and scholarship has become more international, universities have inevitably become more globally engaged. And all top-ranked universities have taken on global perspectives and often global involvements as well. There is an increasing divide between the perspectives as well as the policies of most academic institutions and important segments of the U.S. population and the Trump Administration. So far, the academic community has maintained its global perspective—to its long term advantage. Globalization broadens the perspective of higher education—and is indeed is central to its mission.

How does internationalization shape higher education?

What factors are most important to create an internationalized campus?

While every university will have its own circumstances and realities, there are several rather obvious elements that are necessarily part of an internationalization strategy.

What motivates me to be involved in research and other aspects of international education?

I think that I am one of the few academics who has been involved in international higher education throughout my career of more than a half-century. My home field is comparative education, and my doctoral research was done in India, where I have had a lifelong interest. Because the field of comparative higher education did not exist in the 1960s, I helped to create it and have supervised more than 80 doctoral students, mostly in the field. I have from the beginning been convinced that universities are key institutions in developing countries, long the focus of my research, and that they are key social institutions deserving of support everywhere.  I have been involved in collaborative research projects on such themes as student political activism (which was the topic of my dissertation), the academic profession, university reform, the development of global knowledge networks, and others.