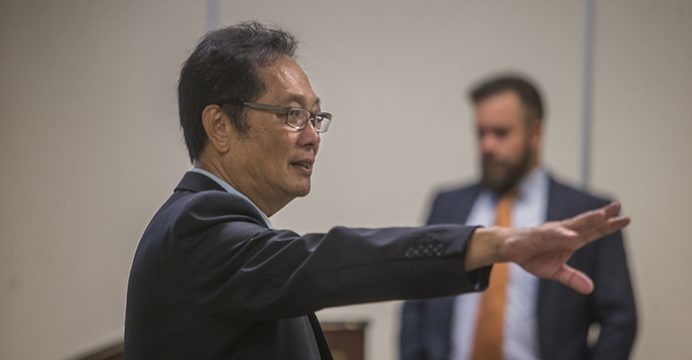 By Austin Petroski, The Daily Iowan

Leaders from Academic Studies Abroad Global met with leaders from the Iowa City area on Monday afternoon to discuss business opportunities and to sign a “memoranda of understanding.”

Business and government officials from Iowa City, Coralville, and North Liberty spoke to the delegation of Chinese and United Kingdom investors and educators during the meeting.

Studies Global was created more than 30 years ago and was originally an international education agency operating in Taiwan and China, sending students to the U.S. and UK to get undergraduate degrees, along with sending U.S. and UK students to China and Taiwan.

Michael Lee, the CEO and founder of Studies Global and a UI alumnus, bought Hamburg Inn No. 2 this year. After that purchase, he changed the name of the organization to Academic Studies Abroad Global and opened an office in Iowa City above the restaurant.

“Michael Lee bought the restaurant because he liked it, and then he established the ASA Global Iowa City location above the Hamburg Inn,” said Studies Global U.S. Director Gleidson Gouveia.

The company also has headquarters in Shanghai and Taipei.

Studies Global entered a memorandum of understanding with the University of Iowa on Monday. Downing Thomas, the Dean of International Programs, signed on behalf of the university and the city of Iowa City, and Coralville Mayor John Lundell signed for Coralville.

Iowa City City Manager Geoff Fruin was not in attendance, though he had previously signed for the city.

The understandings are for projects that are in the interest of both the delegates and the Iowa groups.

The UI entered its memorandum of understanding with Zhejiang University, a top-15 university in the world, and the contract will consist of a two-plus-two program in which students will spend two years at each university.

Lundell said his city has two characteristics which made it a viable place for Studies Global to sign a memorandum. The first was that of the pride that the city has and second was the vision that city officials have set forth.

“We are fortunate to have city leaders who create a vision its citizens support,” he said.

Gouveia said many of the plans for the business are still in the making, with most of them being replicated under the EB5 program. EB5 allows foreign investors who create 10 jobs in the United States to obtain green cards.

“The memorandums will make possible further partnerships with these entities,” he said.

The delegation will also spend time in Coralville, Des Moines, and Crete, Nebraska, in the coming days to meet with politicians and the president and vice president of Doane University.