Jeffrey Ding, a University of Iowa junior from Iowa City, Iowa, has been getting a lot of good news lately.

Ding, a Presidential Scholar and member of the UI Honors Program, was attending a panel discussion about graduate study in the United Kingdom on Friday, April 10, in the Blank Honors Center when the Q & A session abruptly turned from the potential of the Rhodes Scholarship to the reality of the Truman Scholarship. 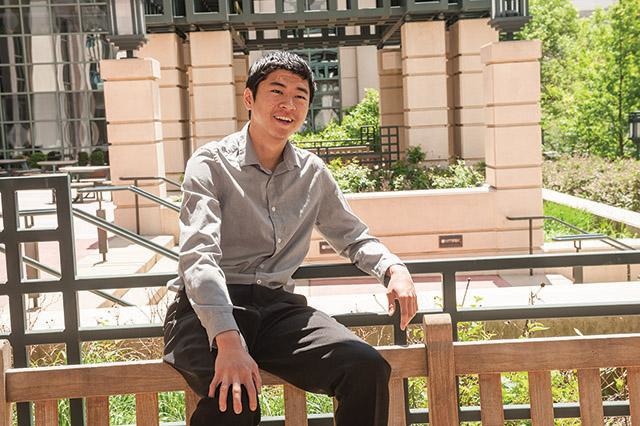 UI student Jeffrey Ding is the recipient of both the 2015 Truman and Udall Scholarships, making him only the third student in UI history to receive both honors. File photo by Bill Adams.

Kelly Thornburg, director of scholar development in the Honors Program, worked closely with Ding to apply and prepare for both the Truman and Udall Scholarships. She used the moment to surprise him with the news in front of many of his friends and faculty mentors, including the UI’s other 2015 Truman finalists, Carter Bell and Maddie Bro.

“Winning the Truman is a life-changing experience for the scholar, but that moment is possible because of the passionate commitment of both the student and their community of support,” Thornburg says. “This year, we were able to share it with so many of the smart, generous faculty, students, and campus leaders who have been a part of Jeffrey’s journey here at the University of Iowa. It was more than fun. I think it changed us, too.”

Ding, a student in both the Tippie College of Business and the College of Liberal Arts and Sciences, is pursuing majors in economics, political science, and Chinese. He is among only 58 students selected from 688 candidates nationwide in the 2015 Truman competition.

Truman Scholars are selected on the basis of academic achievement, record of leadership, and likelihood of engaging with their local, state, or national communities as change agents.

Ron McMullen, UI’s ambassador-in-residence, recommended Ding for the award and helped prepare him for his finalist interview. He also was present for the announcement.

“Mr. Ding is a great fit for the Truman Scholarship program. Watching Jeffrey interact with other students and faculty in and out of the classroom, it is clear that he is a thought leader,” McMullen says. “Jeffrey’s style is neither flashy nor overbearing, but he really connects with people. I have no doubt that he has the potential to contribute significantly to U.S. public service in the not-too-distant future.”

Truman Scholars receive up to $30,000 for graduate study as well as priority admission and supplemental financial aid at some premier graduate institutions, leadership training, career and graduate school counseling, and special internship opportunities within the federal government.

Liz Christiansen, director of the UI Office of Sustainability, has been a frequent collaborator and mentor for Ding as he has explored his own relationship with the environment and his calling to advocate for thoughtful, sustainable action in his chosen field of global economics.

When she heard that Ding had received a Udall Scholarship, a $5,000 award that recognizes sophomores and juniors who demonstrate academic achievement, strong leadership skills, and a commitment to careers in the environment, health care, or tribal public policy, she was quick to share her excitement.

Jeffrey Ding is the third UI student to ever receive both the Truman and Udall Scholarships. Past recipients include Meredith DeBoom of Sibley, Iowa,  in 2008, and Chris Page of Iowa City, Iowa, in 2010.

“We are so pleased to see Jeffrey recognized for his work with the Udall Scholarship, especially for his dedication to building a sustainable world,” Christiansen says. “He cares deeply about people and our planet. Jeffrey’s personal dedication and his ability to serve as a model for effective student activism have encouraged students to take up the environmental cause and help our campus become more sustainable.”

Once he was able to absorb the good news, Ding shared his perspective on both the application process and his future goals.

“I focused both of my applications around the idea of building sustainable relationships, both between the U.S. and China and between humans and the environment,” Ding says. “Looking back on the experiences and teaching that made me a competitive applicant, I also realize that my success is dependent on the relationships I have built at the University of Iowa within student government, with professors, and with lifelong mentors.”

This summer, Ding will intern with the U.S. Department of State to explore the potential of international diplomacy and the Foreign Service. He hopes to pursue a career in global economics that will allow him to continue pursuing sustainable initiatives.

Jeffrey Ding was also a 2015 Boren Fellowship recipient to China. Boren Scholarships provide American undergraduate students with the resources and encouragement they need to acquire skills and experiences in areas of the world critical to the future security of our nation. In exchange, recipients accept a service requirement to work for the federal government.