By Ben Marks, The Daily Iowan 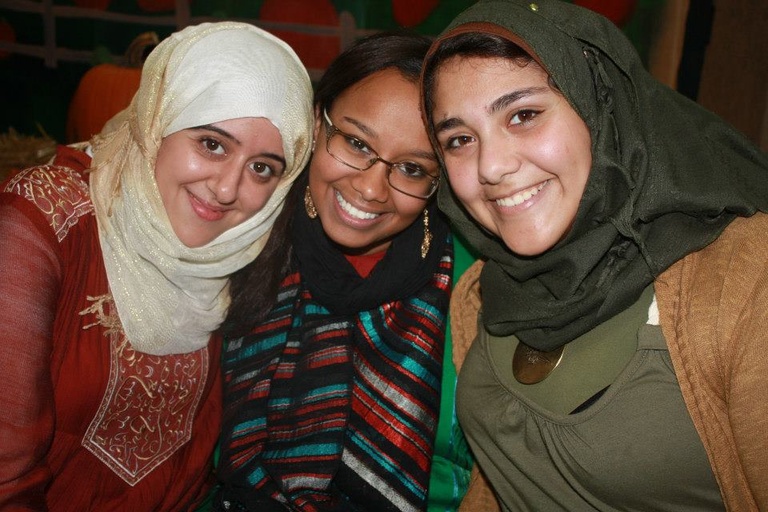 UI Muslim Student Association members will teach others how to wear a hijab.

Some University of Iowa students will soon “hijab-it-up,” break a “fastathon” with crêpes, and pass out flowers of faith.

This week, the UI Muslim Student Association will host its first Islam Awareness Week, a series of events designed to raise awareness and understanding of Islam on campus.

“With all the issues going on in the news, with Muslims and Islam in general, we want to try to make the gap smaller between what people think they know and what is actually going on,” said Moustafa Ibrahim, the president of the Muslim Student Association. “[And] bring some closure to some unanswered questions that people might have on campus.”

On Monday, the group held the Islam Expo in the UI Main Library, during which they stood in front of poster-board displays and answered questions from curious students on topics ranging from the Five Pillars of Islam to Islam and science and Islam and marriage.

The group chose topics based what they thought college students and faculty would be most interested in, said Muslim Student Association Vice President Noha Karim.

“I have a lot of friends who aren’t Muslim who have questions continuously about something they heard or something they don’t understand,” Karim said. “We just want people to understand what our views are about and why we have them.”

At a research university such as the UI, Karim said, the topic of Islam and science was a particular draw, with several professors stopping by with questions.

Iowa City resident Leiden Cervantes also visited the expo and said it was a very rewarding experience as an atheist.

“It was actually really cool, a bunch of people explaining how their religion exists to them,” Cervantes said. “It’s a lot easier than reading the creeds online where it’s like, ‘Yeah, OK, this is what it’s about,’ but what do people actually believe in their day-to-day lives?”

Cervantes said he will most likely attend some of the group’s future events, including an “Around the World With Abrahamic Faiths” panel on April 9.

The rest of this week will feature various events, including a “Hijab It Up” today, in which non-Muslim women will be invited to try wearing a hijab for a day to see what it’s like, then attend a panel discussion afterwards.

Although the main purpose of the week is education and awareness, Karim said, bringing people together is also very important.

“We also want to get the Muslim community together more,” she said. “Everyone is so busy with everything going on, so it’s nice every once in a while to have these events where you see more Muslim faces around.”

UI junior Asaju Walker, a newly converted Muslim, said being able to visit the expo and talk with others who share his faith helped him feel a part of the community.

“It’s not guaranteed that you’re going to have a Muslim classmate or people who are understanding of you,” he said. “For me, personally, it’s helping me see these faces, so when I see them in other settings I know they’re a Muslim person, or they’re there to build that friendship or community and hopefully, have it continue throughout the year.”

Although Ibrahim said he believes the UI is better than some places in regards to Islamophobia, there is still a lot of work that must be be done.

A veil-wearing friend of Karim’s, she said, has had objects and insults thrown at her, while some students once threatened to pour soda on Karim while she was praying.

Although nothing happened, Karim said, it was the first time she had experienced something like that and she was shaken.