Fifteen small businesses in Iowa opened their doors to University of Iowa students to find out how they could market their products to Chinese consumers.

Tippie College of Business Professors Lon Moeller and Jay Christensen-Szalanski decided to add a bilingual hoop for students to jump through with this semester's online Introduction to Law course.

"We were trying to make the course more accessible to (UI's Chinese students) so they could better understand it and then in the process take advantage of the skills that they have and have them work together with the native English-speaking students," Christensen-Szalanski said. 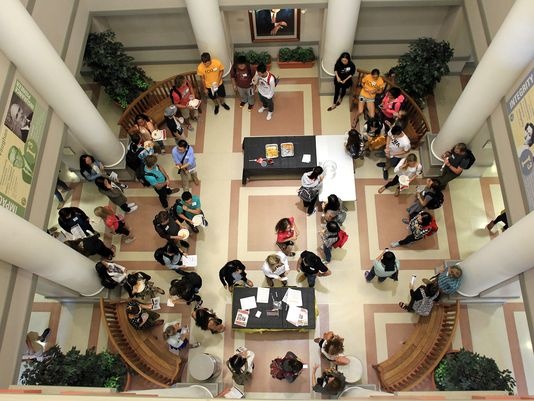 The University of Iowa is currently home to 2,597 international students from China or Hong Kong

One section of the course was offered in English to 280 students and one section was offered in Chinese to 125 students. Students from both language sections worked together on the semester-long learning project.

The 16 teams — the Amana Colonies had two presentations — each had more than 20 members, which led to some logistical issues as students had to figure out when to meet, coordinate schedules with each other as well as their busy small-business owners, and discover how to be more proficient working on a multicultural team.

The English section utilized its familiarity with Iowa small businesses and the Chinese section brought its knowledge of the Chinese consumer.

Focusing on China wasn't because it's the world's second-largest importing country — but that didn't hurt.

Class creators wanted to create a course that would make it easier for American and Chinese students, who make up the overwhelming majority of UI's nearly 4,000 international students, to learn about each other's cultures and to work on a cross-cultural level, said Dimy Doresca, who is a lecturer and director of the Institute for International Business.

The project was a true interdepartmental collaboration with aid from faculty in the Chinese Language Program, Division of Continuing Education, the John Pappajohn Entrepreneur Center and the Institute for International Business.

"The success of this project is a great example of how effective this university is because of the lack of barriers for departments to work with each other," Christensen-Szalanski said.

The Entrepreneur Center also arranged for a panel of experts to evaluate the top four student teams and provide $250 scholarships to each member of the team with the best report.

What made those four stand out to the professors?

"The approach they took in conducting the analysis, the depth and breadth of the analysis, and also the time that they spent on making sure that they get the right recommendations in their final executive summary," Doresca said.

Groups made suggestions such as how a product would need to be adapted for the Chinese market, how to scale entry into China or whether to add a partner in China.

But it was the Laura Soybeans team, which was the only one Friday that featured American and Chinese student presenters, that walked away with the scholarships after nine group members presented their findings and recommendations.

The team made two main recommendations to Laura Soybeans to help them take advantage of the growing soybean market in China.

First, Laura Soybeans should enter Taiwan first because it's smaller and will ensure the company can keep up with demand. The company should next target big cities in China such as Shanghai, Beijing and Hong Kong because consumers there are more likely to spend money on high-quality food.

"I'm hoping (the businesses) will understand and like the students' recommendations, and they will come back … and ask us how to implement the students' findings," Doresca said.